The Colo colo or Colocolo is a mythical creature that resembles a snake with the head of a rooster. This creature is born from the egg of an old chicken or a red rooster. Unlike others, this egg is grey, and its diameter doesn't exceed 1cm. When the Colo colo emerges from its egg, it looks like a worm and hides in the stables of the house. Several weeks later it adopts its final from. In the nights, this creature sneaks in the bedroom and absorbs the people's saliva until they are left as a pile of bones. A machi, a priestess of the mapuche, is the only person that can get rid of this creature using her powers. The marsupial, monito del monte, is called Colocolo by those who think they are looking at the mythical creature.

The video about the Colo colo 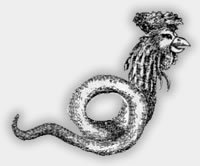