The origin of the Copihue

The Copihue is the Chilean national flower and because it's an endangered species, its protected from being cut or sold. There is a legend about the origin of this flower that comes from the Mapuche and it starts like this: long ago, when the Pehuenches and Mapuches lived in the land of Arauco, there was a princess from the Mapuche called Hues and a prince from the Pehuenche called Copih. They loved each other, but their tribes were enemies, so they had to meet in secrecy in the forest. One day, their fathers knew about what their sons were doing and went after them, each on their own. When Hues' father saw his daughter it Copih, he threw his lance piercing the boy's heart. Due to this, Copih's father did the same to Hues. The bodies of the lovers sunk deep in a lake and both tribes cried their loss. After a year, both tribes reunited in the lake to commemorate the death of the lovers and spent the whole day there. At the next morning, two lances emerged from the lake carried by two flowers, a red one and a white one. The flowers where called Copihues as a sign of the union between the princes.

The video about The origin of the Copihue 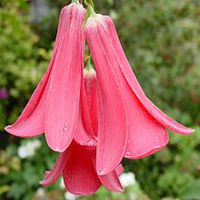