The sorcerers of Salamanca

In the city of Salamanca, in a cave known as the Raja of Manquehua, the souls of defunct sorcerers reunite in the name of the Devil. They use their black magic to create luxuries for their celebrations like exotic food, gold and jewels, also they use it to cast snakes to guard the entrance of the cave. Novice sorcerers are invited to this event to give them power and encourage them in their trials, but they can't take anything from the cave since those luxuries can only be enjoyed there. If something is taken from the cave, it transforms into horrendous things like parts of corpses. Performing the sign of the cross (signum crucis) or reciting holy words is enough to cause havoc among them and disappear. Otherwise, the presence of the sun would make them end their activities. This myth came to be due to people finding torches and signs of fire in the cave, followed by tales of people who presumably participated in them with their evidence being only bones and rotten meat.

The video about The sorcerers of Salamanca 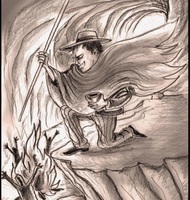